Standardized testing has a long history in education in the United States. Since the 1980s, lawmakers have worried that the declining academic performance of American students threatens the United States.. These fears have prompted the federal government to implement an increasingly intrusive set of policies intended to boost academic achievement.

Presidents Bill Clinton and George W. Bush attempted to lessen the concerns about public education through promoting statewide standards and assessments that all children should achieve. Clinton offered model standards that states could voluntarily adopt, since enforcing national standards was unconstitutional. Bush took it further by tying federal sanctions to the performance of schools and districts on statewide tests.

By now, most states have chosen not to use the PARCC (Partnership for the Assessment of Readiness for College and Career) and Smarter Balanced (SBAC) assessments, which were designed after the Common Core State Standards Initiative. In 2010, the PARCC and SBAC consortia reported having 26 and 32 member states, respectively, representing diverse political environments. Only Alaska, Minnesota, Nebraska, Texas, and Virginia declined to join by the end of that year. Alaska, whose state standards were closely aligned with the Common Core, affiliated with SBAC in 2013. Minnesota adopted only the English language arts standards and so did not join a consortium. Nebraska, Texas, and Virginia supposedly never adopted Common Core or affiliated with a consortium.

Iowa, North Carolina, and Wyoming are affiliate members. Previously, it had 30 members. Member states can associate with one or both consortia, without committing to using either test.

Five Things every parent, educator, and legislator should know about high-stakes, standardized testing 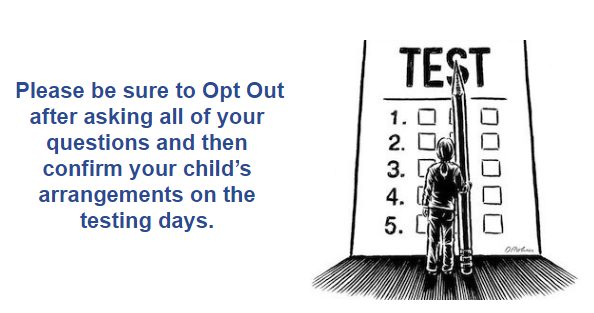 Here are some fabulous guides about Opting Out of testing in Florida:

United States Parents Involved in Education (USPIE) is a nonprofit, nationwide coalition of state leaders focused on returning control of education to parents and local communities by eradicating federal intrusion.

Want to Support Our Mission? Give a Gift Today!